Andrew Liveris, the CEO of Dow Chemical, said yesterday that he planned to repay Berkshire Hathaway the $3 billion Dow received in 2009 to help fund its acquisition of Rohm & Haas.  Berkshire’s investment in Dow is in a 8.5% convertible preferred stock that has resulted in Berkshire receiving $255 million in dividends annually.  The preferred stock is convertible into 72.6 million shares of Dow at a conversion price of $41.32.  Dow’s shares closed yesterday at $29.18.

When these preferred shares are redeemed, Berkshire will have an additional $3 billion to invest.  I am quoted in a Bloomberg article on this topic:

“Dow’s funds would give Buffett “a little more ammunition in trying to acquire a whole company” or make new or larger equity bets, said David Kass, a professor at the University of Maryland’s Robert H. Smith School of Business, in an interview before today’s conference call.”

The link to the entire article is:

In 1990, Berkshire Hathaway made an initial investment in Wells Fargo of $289 million (5 million shares). That position was relatively stable from 1990 through 2004.  (In 1998, Wells Fargo merged with Norwest and each share of Wells Fargo was converted into 10 shares of the “new” Wells Fargo.)  Beginning in 2005, Warren Buffett has added to his stake in Wells Fargo, as shown in the table below: 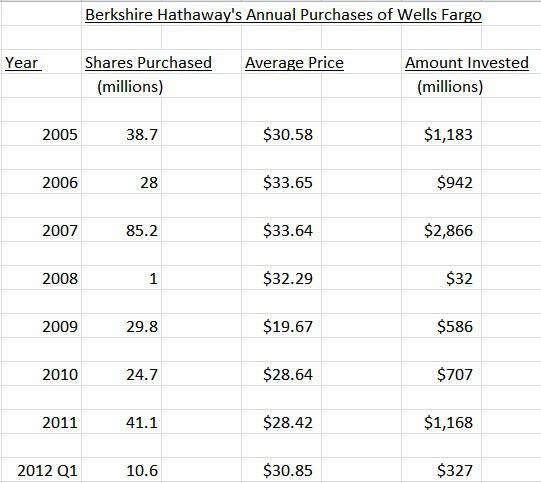 (Source: Data derived from Berkshire Hathaway Annual Reports 2004-2011, SEC 13F First Quarter 2012, and Yahoo Finance.)  (Note:  It is assumed that Berkshire Hathaway purchased its Wells Fargo shares at the average price in each time period.  Neither the annual reports, nor the 13F filings, reveal the actual cost of these purchases each year, or each quarter.)

In recent Berkshire annual meetings, Warren Buffett has praised Wells Fargo as one of his favorite investments.  It is ranked number one in the U.S. banking industry in total market value ($176 billion), even though it is only fourth largest by assets.  It has the most extensive bank branch network in the U.S., with 6,200 retail branches in 39 states, and serves one of every three U.S. households.  Wells Fargo originates one of every four home mortgages and services more home loans than anyone else.  What seems most notable of all is that this is one of a relatively few large banks that has focused almost exclusively on its original mission of commercial banking.  It has not diversified into the high risk area of investment banking as so many of its major competitors have.  In addition, it has avoided geographically expanding into Europe, where the banks and economies of many countries are facing enormous challenges.  Indeed, 97 percent of Wells Fargo’s assets and 98 percent of its employees are based in the U.S.  Wells Fargo vigorously pursues a cross-selling strategy, in which additional products are sold to its existing customers.  The average Wells Fargo customer now uses six products from the bank, a substantial increase from the one or two in the 1980’s.

Wells Fargo’s 2011 net income was almost $16 billion, up from $2.7 billion in 2008.  In 2008, it purchased Wachovia for $15 billion, which greatly expanded its presence in the East and the South.  This acquisition also resulted in a major entry into brokerage services through Wachovia’s A.G. Edwards, which enhanced its ability to cross-sell additional products.

With analysts currently projecting Wells Fargo to achieve annual growth in earnings per share exceeding 10% over the next five years, and with the shares reasonably valued at 10 times earnings, Wells Fargo is a very attractive investment with an appealing risk/reward profile.

This article has been published by Seeking Alpha and GuruFocus:

This article has also been published by Business Insider and Forexpros:

h J R
@DrDavidKass RT @ojblanchard1: How can we have so much political and geopolitical uncertainty and so little economic uncertainty?