(1) Warren Buffett seeks to invest in companies with businesses he can understand, are within his circle of competence, and will do well 10 to 20 years from now.  They are like a castle protected by a moat.  He likes products that cost 1 cent, sell for 1 dollar, and are habit forming.  Coca-Cola is an example.  Usually, companies that meet these criteria are regulated.

(2) Coca-Cola travels well (sells well in other countries), but Hershey and Cadbury do not.  See’s Candies sells well in California, but not on the East Coast.  If someone wants a Snickers bar they will be willing to pay a higher price than for a similar substitute.

(3) Jorge Paulo Lemann:  3G Capital (Brazil) builds companies to run for the long run.  Beer is not growing in the U.S. and Europe.  But Africa presents a growth opportunity (Anheuser-Busch InBev) with the acquisition of SAB Miller. Africa has a rapidly growing population of young people and has a hot climate — ideal for selling beer.  Africa’s current population of 1 billion is expected to double in 20 years.  3G Capital plans to become an expert in marketing and in developing new products.  There is not much more to be done in the beer market through acquisitions, but there is a lot to be done in the food area.

(4) A student asked whether the largest companies in the U.S. by market capitalization, technology companies (Apple, Google (Alphabet), Amazon, Facebook), are likely to remain the largest in the future.  Buffett noted that these companies have no tangible assets and no receivables and together have a market capitalization of $2 trillion.  This is a very different business model from previous decades.  (Also, the candy business does not require capital.)  But with technology, things change fast.

(5) Buffett mentioned that free trade is extremely important.  It is the market system for the world.  Those who are hurt by it would be helped through an earned income tax credit.

(Note: This blog post has been published by ValueWalk.)

Berkshire Hathaway announced today that it has sold about 7 million shares of Wells Fargo and it plans to sell another 2 million shares in order to keep its ownership stake below 10% so it would not be classified as a bank holding company.  These sales represent less than 2% of its 500 hundred million share stake.

“We will monitor the outstanding share count of Wells Fargo in the future, and, if necessary sell shares in amounts to keep our ownership interest slightly below 10%.  Berkshire has no present intention to sell Wells Fargo shares in amounts beyond the quantity required to provide a small safety margin below 10%”

Arena cameras focused on a fan holding a sign asking the Cavs to win the game for her 84th birthday. Buffett responded with a sign of his own, telling the fan that at 84, she’d just be old enough to intern at his multinational conglomerate, Berkshire Hathaway. 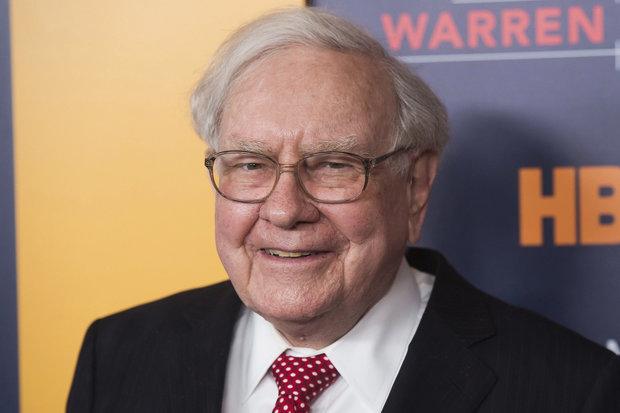 American billionaire and soda addict Warren Buffett is helping his favorite soft drink company gain a larger foothold in China by allowing his own likeness to adorn cans of Cherry Coke in the country.

Cherry Coke was launched on the Chinese mainland back on March 10th. To help build up more buzz for the syrupy sweet beverage, Coke says that special edition “Oracle of Omaha” cans will now be available during a promotional period and while supplies last.

“I can’t think of a better way to launch Cherry Coke than with its best-known fan on the package,” Coca-Cola Chairman and CEO Muhtar Kent said in a release. “It is an honor for us to be able to feature Warren on his favorite drink as it rolls out in one of the world’s most exciting and dynamic consumer markets.”

Thanks to his incredible business success, Buffett enjoys a large following in China. Last year, over 3,000 Chinese investors traveled to Omaha to attend his Berkshire Hathaway annual meeting, the Omaha World Herald reported. In 2015, a Chinese video game developer paid $2.3 million just to have lunch with Buffett.

Though Chinese investors may want to emulate the 86-year-old billionaire’s financial success, they should probably not try to copy his drinking habits. “I’m one quarter Coca-Cola,” Buffett said in a 2015 interview with Fortune magazine. “If I eat 2700 calories a day, a quarter of that is Coca-Cola. I drink at least five 12-ounce servings. I do it everyday.”

SMITH BRAIN TRUST — Gillette is shaving its prices by as much as 20 percent and focusing on its less-expensive products to compete with cheaper rivals, such as Dollar Shave Club. And the move is rattling investors, according to The Wall Street Journal.

“It’s basic economics that manufacturers like Procter & Gamble could raise their prices when their goods were relatively inexpensive,” Kass said.

That’s because, up to a certain price point, people don’t pay much attention to price increases of a dime or two. At those levels, the demand for things like razors and detergent is inelastic, to use the economic terminology. People will buy what they want despite small price moves. However, Kass added, “Procter & Gamble has raised its prices to the point where demand is becoming elastic.”

Kass noted in 2015, “exorbitant” prices for Gillette razors were leading people to seek out lower-cost substitutes, such as generic razors or the low-cost Dollar Shave Club, which was acquired by Unilever. Executives might be inclined to say price sensitivity is a temporary blip, caused by the recent recession. But with the economy steadily improving, it appears that price sensitivity is the new normal.

To bring prices into line with those of its competitors, Kass said, P&G will have to make its manufacturing processes significantly more efficient or reduce its profit margins on razors.

h J R
@DrDavidKass Here's when the coronavirus will peak in your state The University of Washington's Institute for Health Metrics and… https://t.co/wyWcaS1rjN

h J R
@DrDavidKass It’s a Good Time to ‘Stock’ Up Amid market volatility, one thing is clear: Equities have become a good deal. https://t.co/u1hRn4uCDl